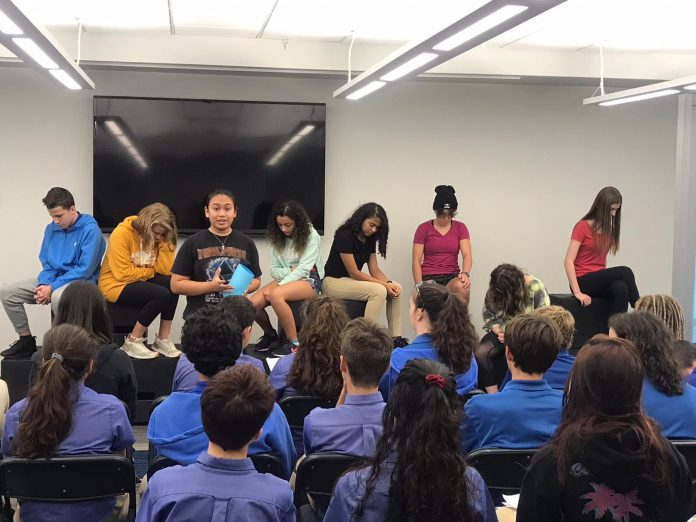 Students from the Alex Panton Foundation Youth Ambassador Programme last week organised a series of workshops and a play that focussed on suicide, depression, anxiety and bullying.

The gathering on Wednesday, 15 Jan. was a partnership among teachers, counsellors, youth ambassadors and 12 drama students from Cayman International School, who discussed issues that affect teenagers.

Teens performed a one-act play, ‘The Bright Blue Mailbox Suicide Note’ by Lindsay Price, which highlighted the importance of friendship and preventing bullying and suicide, as well as tackled the stigma behind mental health issues, according to Bill LaMonte, CIS teacher and an organiser of the programme.

Cristin Jackson, 17, leader of the Youth Ambassador Programme, said she was pleased by the community engagement and felt the play was quite impactful.

“It focussed on how a group of friends reacted when an anonymous suicide note was found. Despite different perspectives and rising tensions, by the end of the play, the group was able to begin having honest conversations, no matter how challenging they became,” Jackson said.

She added she is hopeful that such discussions will continue to raise awareness around mental health issues in Cayman.

“The Youth Ambassador Programme aims to release a campaign entitled ‘Don’t Stay Silent’ as we strive to decrease the stigma around mental health issues and encourage solutions to obstacles the youth face,” Jackson said.

The campaign will highlight the impacts of domestic violence, bullying, drug and alcohol abuse, anxiety, depression and suicide.

One of the student actors, Angelia Sargsyan, 14, said, “Like the characters in the play, teens often pretend to have a fairytale life, but we all have issues that we hide.”

The play comes ahead of the Alex Panton Foundation’s third annual Mental Health Symposium that is being held on 22 Feb. at The Ritz-Carlton, Grand Cayman. The theme for this year’s symposium is ‘Empowering Youth. Inspiring Hope’.

Credit to the Cayman Compass
Link to original article