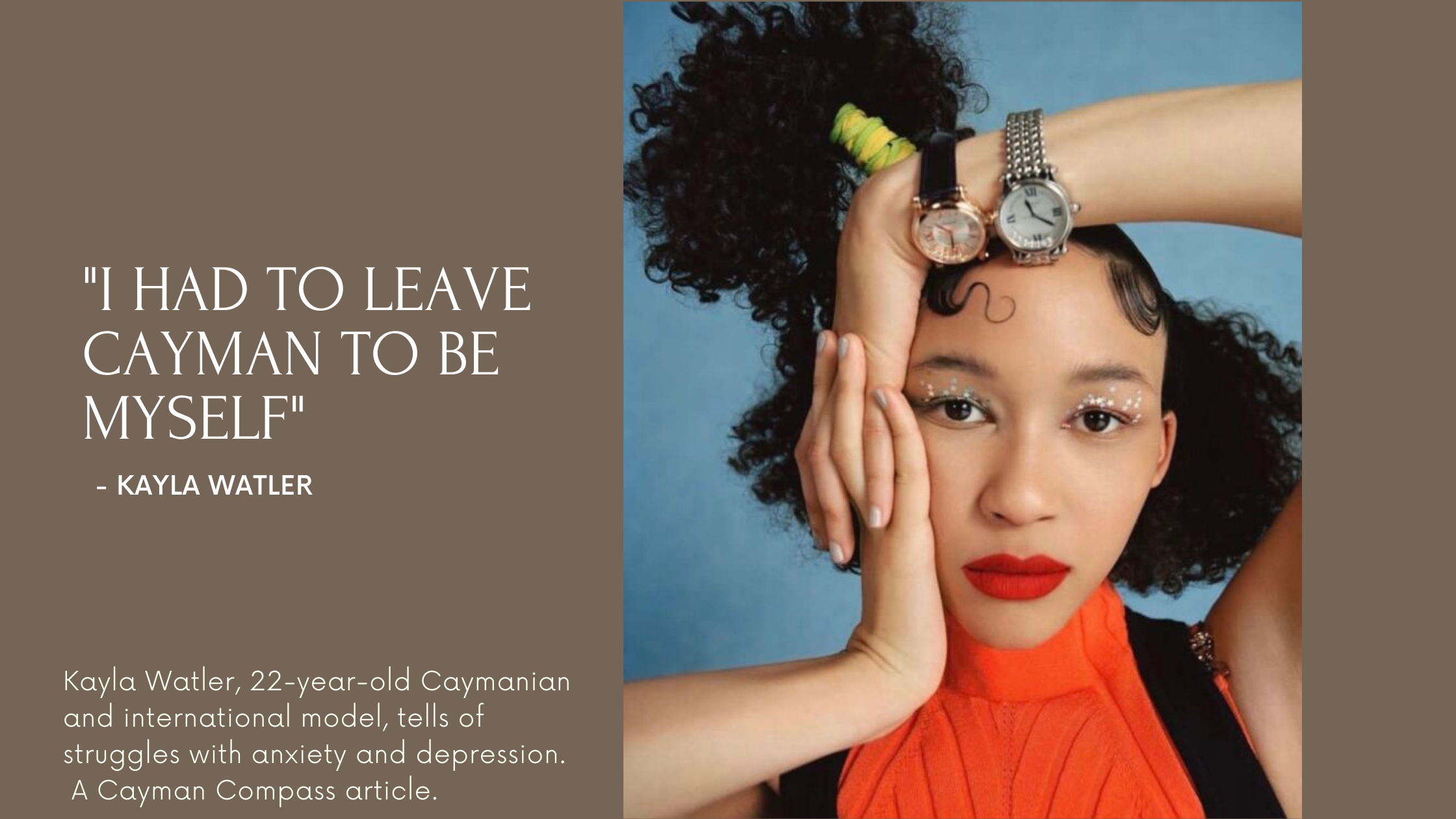 Striding down a city street in killer heels or bouncing from Gucci campaign shoots in Portugal to catwalk events in London, Kayla Watler has the life that many young girls dream of.

But behind the glossy magazine prints and perfect Instagram pictures there is a darker reality.

Success didn’t come without struggle for the 22-year-old model.

Anxiety, depression and alienation have plagued her since she was 12 years old. As a creative, mixed-race child, tall and a little awkward, with striking but unusual looks, Watler struggled to fit in at the majority white private school she attended in Cayman.

She had panic attacks and began self-harming before, as a young teenager, she was put on medication and started seeing a therapist.

The focus on academics, seemingly at the expense of all else, left her feeling stifled and out-of-place in Cayman.

Ultimately, she says, she had to leave the island in order to be her true self.

At the age of 14, her mother, Marsha Parchment, took the decision to move her out of Cayman, first to a high school in Dallas that specialised in art. She went on to go to university in New York and now lives in London where she works as a fashion model.

She has done photo shoots for Gucci, Paul Smith, Balenciaga, and Vogue and Elle UK magazines, among other big name brands. This year, she hopes to sign with an agency in Paris and Japan.

Now she wants to send a message to other young people experiencing mental health or other challenges growing up in Cayman. “You can be whatever you want to be. You just have to persevere with your dreams,” she said. “I wish I could say to my 13-year-old self, keep going, keep fighting, there is a big future out there for you and none of this will matter. I really wish I could have known that when I was young.”

Growing up in Cayman is paradise for many, but it felt like a prison to her.

“I was tall, I got made fun of for my hair; I straightened it out so often that I damaged my curls permanently.”

From Watler’s perspective, Cayman is a tough place if you are not academically-minded. She said she was made to feel dumb by her peers and teachers and her creative side was suppressed.

“If it wasn’t for my family, I wouldn’t have been able to make it this far,” she said. “Some people don’t have that support and I want them to know there is a brighter future on the other side.”

A message to the older generation

She said she also wants Cayman’s older generation to be more accepting of the lifestyle choices and ambitions of today’s young people. Though she recognises the importance of academics, she said the focus on striving to be an accountant, lawyer or financial industry professional left her feeling unvalued as a young girl with a flair for art, dance and drama.

Similarly, she believes Cayman’s ‘traditional’ views about same-sex relationships and mental health are out-of-step with the ideas and values of today’s youth.

She said she wants every young person to know that it is possible to find a place in the world where they fit and are loved and accepted.

Not everyone can be a model, but there are fashion design, hair stylist and photography jobs linked to that profession alone, she said.

“I just want to send a message to young people that you are not alone, you don’t have to struggle in silence, it is OK to be different and know that you are enough. Reach out to someone, a family member, a friend, talk about it and don’t hold it all in. Persevere with your dreams, don’t give up, keep going.”

‘The future is brighter than you think’

Though it did not feel like it at the time, she said the anxiety and stress of her teenage years were temporary.

She now uses coping techniques and self-care practices whenever issues arise and says she has learned to love, accept and believe in herself. She said growing up and moving beyond high school had given her a fresh perspective on the world.

But, she warned, Cayman risks losing its young people if it doesn’t accept them for who they are.

“When they do finish school and go off to university, they will find a place where they are accepted and embraced. Unfortunately, that might not be in Cayman, unless things change.”

The process has been a learning experience for Watler’s family too. Her mother began studying psychology as a result of the struggles her daughter went through growing up. Parchment is now a registered therapist who helps other young people handle anxiety and other mental health issues. She wishes she had had the experience and knowledge she has now when her daughter was younger.

“At some points I just felt helpless,” she said. “She would have panic attacks on the way to school and I just had to pull over and I didn’t know what to do.”

Now, almost a decade later, she watches proudly as her daughter makes a name for herself and for Cayman on the catwalk.

She is proud of her for realising her dream, but also for coming through the dark times and for trying to use her profile to help others.

“People say she’s so pretty, she’s successful, she’s a model, but they don’t know the struggle behind it, they don’t know her story,” Parchment said. “I have watched her come out of the cocoon and start to grow.”

If there’s a message she hopes that Cayman society can take from both her daughter’s struggle and success, it is to be more open to difference and diversity.

“Times are changing, kids are different and they want to be accepted and loved for who they are,” she said. “They don’t want to be judged or just tolerated. Cayman has to meet them where they are at and stop trying to change them.”